Important note: If you have optimized your thumbnails with ShortPixel Image Optimizer, or any other image optimization plugin, the thumbnails you will regenerate will be processed again.

reGenerate Thumbnails Advanced (RTA) comes in handy when you install a new WordPress theme on your site that has different thumbnail sizes. While the newly uploaded images will be cropped and resized to fit your new theme, the old thumbnails will remain unchanged. Using RTA you can regenerate the thumbnails for all your existing images.
It is also very useful when you have many not-used-anymore thumbnails and you want to remove them while making sure you have all the needed thumbnails generated.

But it will do much more than this if you tweak its settings. So here's a quick guide on what each setting does. 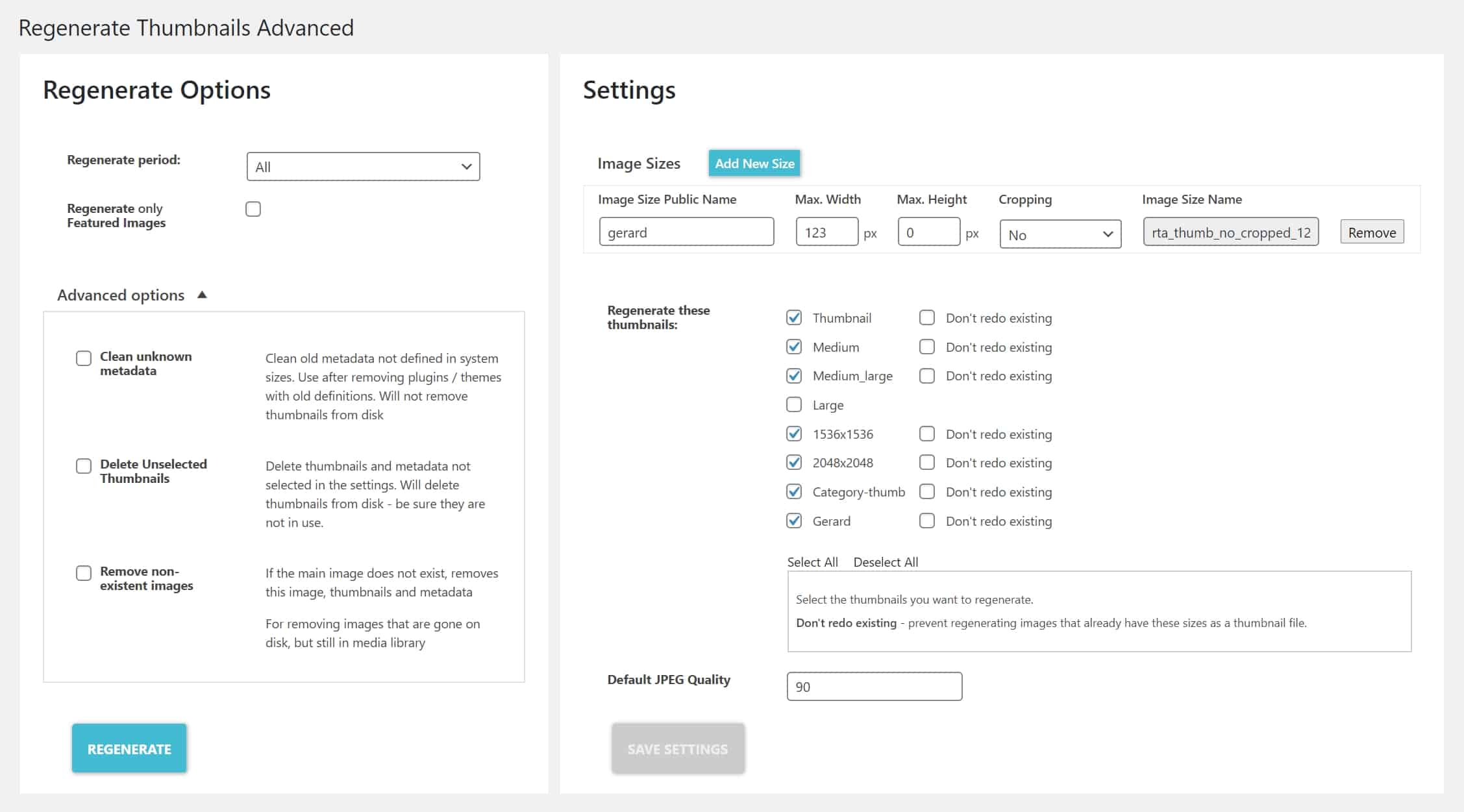 First, you need to to change the settings of regeneration (if you need it). That's displayed on the right side, or if the screen is small enough, top of the screen.

Register custom image sizes. This helps with regenerating sizes which are not registered with WordPress. If you notice a new plugin is adding sizes not present in the list below (which means such plugin is not properly registering its sizes on WordPress), you can use this setting to register them with WordPress and make sure the thumbnail regeneration process will create them too for the old images.

Or you maybe just want a new image size on your site. Just add the size here.

It's important to know that if you register new sizes, you must have active the plugin if you want such sizes to be always generated. In other words, if you deactivate the plugin, the new image sizes will not be created for new uploads anymore.

Select which thumbnails you want to regenerate. All this option does is to decide which thumbnails are regenerated and which not. If you uncheck a size, it will not be touched (unless you check Delete Unselected Thumbnails, which we will explain later).

Please note that the fact that you uncheck the sizes here doesn't mean that it will unregister them in WordPress, because they are registered by the theme or plugins, so they will still be generated for newly added images.

The Don't redo existing checkbox will make sure that if a specific image size is already present in the file system, it won't be overwritten when regenerating. This is especially useful if the images were optimized with an image optimization plugin such as ShortPixel Image Optimizer (by the way, because of this feature, reGenerate Thumbnails Advanced is the only thumbnail regeneration plugin that works well with ShortPixel Image Optimizer).

You might want to uncheck Don't redo existing if for example you watermarked your thumbnails and the originals are not watermarked, and you would like to remove the watermark for the thumbnails too. Or if you have corrupted files after a site copy.

We don't recommend to change it unless you clearly know what you are doing, as lowering the number could over-optimize your pictures.

For the avoidance of doubt, ShortPixel Image Optimizer compresses your images taking into account the default compression WordPress already does.

Time to regenerate your thumbnails.

You can choose if you want to regenerate all the thumbnails or only the most recent ones (last 6 months, three months, etc.).

This option removes the old metadata undefined in your system sizes. You can use it after removing plugins and/or themes with old image definitions. This is useful to get rid of those definitions and sizes generated by uninstalled plugins and themes that still show up in various menus and screens.

Please notice that this will not remove thumbnails from disk.

An example when this option comes in handy: you used a gallery plugin which makes its custom sizes and you stopped using it. The thumbnails remain on disk but they're not used any more, so you would want to get rid of those.

Please also note that there are cases when some plugins use additional thumbnails but they don't declare them to WordPress or not even add them to the metadata of the image. Because of this, it's strongly recommended to make a backup first, then after running the regeneration, check thoroughly the site to see if there aren't any missing images. If you notice missing images, restore from backup.

This option will check if an image (not thumbnails) is stored in the Media Library.

Did this answer your question? Thanks for the feedback There was a problem submitting your feedback. Please try again later.